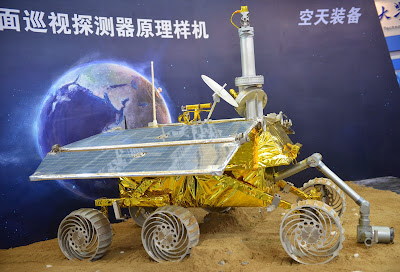 Model of a lunar rover named Jade Rabbit in a nod to Chinese folklore that will explore the moon’s surface in an upcoming space mission is seen on display at the China International Industry Fair 2013 in Shanghai.  The rocket carrying the probe will be launched in early December, China’s official Xinhua news agency said, citing the State Administration of Science, Technology and Industry for National Defence.

Who said the NASA hoaxsters don’t have a sense of humor?

Am I the only one in Ontario that thinks there is something severely wrong with the whole SIU? It is really a civilian agency that is meant to oversee police wrongdoing, or is it simply a psyOp black hole where information allegedly goes in and never comes out? Are there any real civilians running the board? Was it ever a real entity? Has it been taken over by dark forces? These are serious questions that a real investigative reporter needs to find answers to. Do real investigative reporters even (ever) exist?

The following story of “another” Toronto-area man being shot due to mental health issues is full of holes, problems, and lack of information (the Sammy Yatin streetcar hoax was the other big one). If this is a real case, then where is the real information? If a public civilian police oversight body is really looking into it, then the information should be public immediately.

The SIU seems to stand for no information at all, not now, and maybe not ever. I’ll provide links and screenshots for you to peruse, and help me decide if this case is real or simply another psyOp with a police-gone-wild-mental-health issue meme (with a childhood bullying thrown in for good measure).

The SIU has assigned 13 investigators and three forensic investigators to probe the circumstances of this incident.  At this time, one subject officer and four witness officers have been designated.

If this is a psyOp, what other memes could be at play? Could the agitators/inventors of these psyOps be more interested in creating a dialectic to create turmoil/strife, such as

Who, if any in these bodies, are complicit? How many, if any, have to be aware of a hoax/psyOp within the SIU or the police? Is anyone in our unaccountable or uncontrolled provincial government aware or able to do anything about this co-opted civilian/police structure? Is creating and maintaining the Rob Ford drug-using mayor farce used to keep the public’s critical eye off these very serious (especially if fake) hoaxes?

Is anyone paying attention? Does anyone care? Is the public fully conditioned to accepting the fact that no serious matter can ever be resolved, and is simply pushed down and out of sight by endless waves of nonsensical or fake news – never to be followed  up or brought up again?

Did I mention this site is really about 9/11?

I am trying to work on two very important pages, linked at the top.

If you have time and wish to help add to the digests, please leave a comment here or in the page itself. I will then transfer it into the main page.

The idea behind these pages is to make it a central place where I can link to the salient points from this blog. It can be a page that we can point those new to fakeology to understand the deception that persists to this minute in our media, the fully controlled organ of the intelligence state.

Hollow or empty towers went a long way to helping me understand the depth of the deception. Here are old two audios that are worth listening to with Phil and Larry describing their investigation.

As the final 9/11 knot unravels with the realization that the 9 buildings at the WTC in NYC were demolished (by CDI) conventionally and the collapse footage being Hollywool (by CGI), it seems that the forums are being flooded with the tried and trusted and NOT true nuclear (unclear) Magick myth.

When the beliebers stop believing, hit them with something you know scares them.and shuts them.up.

For me, it was because of the 9/11 hoax that I even bothered to question the whole nuclear concept (and all of science for that matter).

Here’s a “linesman” with some “inside” information. He questions at the end why they would go to all the trouble to fake it. This is deception method #3 from Penn and Teller’s handbook. The answer in the end is money and fear – boatloads of both.

I see your “take on it” and I’d like to contribute to this thread if I may, and I beg pardon for quoting your contribution as an illustration of some general misunderstandings people have about nukes.

I don’t look that hard for these numbers, but it’s amazing how they pop up everywhere.

In this case, who would bother to verify the claim of saving $33,000 if you bought the entire catalog?

Do the occult rule everything, or do their marketers love to appease them?

I write this as the temperature outside is -22C.

Crazy Joe doesn’t have a chance