In Ontario, we are “dependent” on “nuclear” power. Since I don’t think it even exists, that leaves a problem…where does the power come from? The latest swindle is windmills. During our current heatwave, you may have noticed that the air stands still. Windmills don’t turn, unless of course they are using power, which they must have at all times to keep them from seizing. So, if they don’t supply baseline power, and don’t provide power in extreme heat or cold (when the wind is least likely to blow), what use are they? Who is making money from them? Their characteristics are very similar to nuclear, except this time, people can understand how they work and also see when they are generating power (or at least see when they turn).

He noted that as demand for power surged Monday due to the heat wave, the province’s wind turbines were producing only 2 megawatts of power at 10 a.m. By 11 a.m., it had risen to 3 megawatts.

Meanwhile, market demand for the day peaked at just under 26,000 megawatts. 0
Be the 1st to vote.
Joke or no joke, just another example of media fakery. This actor is highly paid, though, making over $100,000 a year. Is this a harmless prank, or an indicator of more police fakery?

Note: I do look for fake stories, but most are headlines staring me (and you) right in the face. They are not hard to find. Once more, I can attest that it did rain that day. I was not down in the valley to see the stuck train, however. Doesn’t take much for the average researcher to know where this mysterious water is coming from. How about the Neutral Buoyancy Laboratory water tank? Even if they did tell everyone that space is lie, do you think anyone who believe it? After all, they’re telling everyone in this story the truth.

In one of the most harrowing spacewalks in decades, an astronaut had to rush back into the International Space Station after a mysterious water leak inside his helmet robbed him of the ability to speak or hear at times and could have caused him to choke or even drown.

via Astronaut could have drowned during perilous, aborted spacewalk that saw water leaking into helmet: NASA | National Post.

Between 1 and 1 1/2 litres of water leaked into his helmet and suit, NASA estimated.

The main culprit appeared to be iodine-laced water that is piped through the long underwear worn under a spacesuit for cooling. The system holds nearly 4 litres, or 1 gallon. Less likely was the 32-ounce (about 1 litre) drink bag that astronauts sip from during lengthy spacewalks; Parmitano reported the leaking water tasted odd.

Of course none of this story could be true. Either way, those that write the space psyOps are enjoying manipulating you.

English: Mission: STS-41-B Film Type: 70mm Title: Views of the extravehicular activity during STS 41-B Astronaut Bruce McCandless II, mission specialist, participates in a extra-vehicular activity (EVA), a few meters away from the cabin of the shuttle Challenger. He is using a nitrogen-propelled hand-controlled manned maneuvering unit (MMU). He is performing this EVA without being tethered to the shuttle. The picture shows a cloud view of the earth in the background. (Photo credit: Wikipedia)

Wonder who they modeled their sim terrorist after? All for your subconscious.

Listening to master liar Howard Stern this morning psychic drive his distaste for the latest cover of Rolling Stone makes me see how difficult it is for the average person to escape the layers of a suffocating psyOp.

Thousands of people posted on social media networks calling it “tasteless” and “disgusting”. 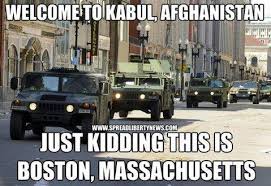 Every industry, including the psyOp fakery business, needs its training grounds.

Tools of the fakery trade…there are so many of them out there. Here’s a taste.

Create fake profile pages just for fun. This fake facebook wall generator allows you to create a funny profile to entertain your friends. Create it, and share it on Facebook !

More tools of the trade in this presentation.