Great post from Lynn, as usual. Here she analyzes the phonytographers and their pictures in the biggest psyOps of our day.

I believe media fakery has been around for a long time, but I only discovered the extent of it while researching the 9/11 event.  September Clues opened my eyes about what we were shown and how they accomplished it. 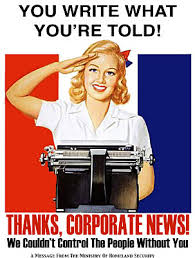 Not that they needed to pass a law to make it legal, now it’s just more in your face.

For decades, a so-called anti-propaganda law prevented the U.S. government’s mammoth broadcasting arm from delivering programming to American audiences. But on July 2, that came silently to an end with the implementation of a new reform passed in January. The result: an unleashing of thousands of hours per week of government-funded radio and TV programs for domestic U.S. consumption in a reform initially criticized as a green light for U.S. domestic propaganda efforts. So what just happened?

From what I understand, psyOps are completely legal for the most part. It’s not illegal to lie via the media. They do get stuck on legal issues like death certificates, as in Sandy Hoax. That’s why they don’t issue them. They then pass a quick law indemnifying them from issuing the certs, and the problem is solved.

The psyOp court writers must have been told to fire up the drama on the Boston Bomber court case, since the CIA News Network needs ratings. The media and intelligence agencies: two wings of the same fakery bird.

After CNN’s win on Monday (thanks to two exclusive interviews related to the George Zimmerman trial verdict) FOX News Channel has returned to outpacing both MSNBC and CNN in both Prime and Total Day. Additionally, FNC delivered 12 of the top 15 telecasts in cable news last night. See below (and our cable news post)  for more: