Here are three CNN anchors that started their on-air careers on Sept. 11, 2001. Any others I should add to this list?

All need to be asked ASAP if they think it’s fate or coincidence that they premiered on this pivotal day.

Although Brown’s first day at CNN was July 1, 2001, his first on-air broadcast was September 11, 2001. He received international recognition as well as winning the Edward R. Murrow Award for his reporting of the attacks from CNN’s rooftop in Manhattan, as well as the World Trade Center site and the areas surrounding the remains of the Twin Towers in New York City.

She then joined HLN (then known as CNN Headline News), where she works now. Among many other stories, Meade anchored the network’s coverage of Operation Enduring Freedom as well as that from Operation Iraqi Freedom in spring of 2003. She is based in CNN’s world headquarters
in Atlanta. Her first day on-air at HLN was September 11, 2001.[1
] 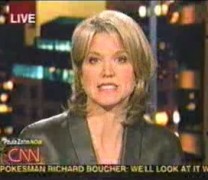 Zahn began her work at CNN on September 11, 2001, joining anchor Aaron Brown in the coverage of that day’s terrorist attacks as her reaction to the events she witnessed. Although not scheduled to appear on a CNN program, which was still in development, she began a regular morning news shift the next day. By January, she launched her CNN morning news program, American Morning with Paula Zahn.

Today’s paper: are any of these fraud numbers real? They sure look familiar. It’s impossible to figure out what’s going on.

At one time I was all excited about “cheap” or “free energy”, but now I’m suspicious it’s just the next fraud being setup as they phase out the old “fission” nuclear fraud.

The facility, which served as a backdrop to the movie Star Trek: Into Darkness, uses 192 beams from the world’s most powerful laser to heat and compress a pellet containing Hydrogen fuel until nuclear fusion occurs.

The whole MJ psyOp is a massive mind f*ck. I do believe he was switched out many times, and interspliced with the Elvis and Faul McCartney entertainment systems to generate interest and mystique. There’s really nothing to it other than keeping the music that “they” create alive and selling. Keep the masses entertained as they are robbed blind.

The answer to fakery is … more fakery, you know to create authenticity. How’s that for the mind f*ck of the day?

“I don’t want to ruin his life by, you know, turning his motivations into something they weren’t,” Hanks said earlier this month. That can be difficult, Hanks said, because of “the fakery that goes on” in creating a cohesive screenplay based on real-life events.

A website dedicated to discrediting the disinfo. I called it disinfo squared.

Yes, that’s what I’d call Box Boy Gage’s clown crew. But it turns out that you can also wake up and smell the coffee for Troof:

Important to know all the layers of the onion.

JFK/RFK/MLK …. all psyOp hoaxes. The fact that people are all arguing over who killed who when THAT is the rabbit hole pathway they lay out. In fact, the real debate is whether these events even occurred at all. Like 9/11, the answer is no. All elaborate media constructions to move the herd.

ROBERT KENNEDY DID HE REALLY DIE -HOAX OR TRUE? – YouTube.