This story of outrage only makes sense when one is a fakeologist.

Footage created in Hollywood for a #hrdpar being reused for an acknowledged work of (bad) fiction.

Too drole for words.

A day after learning that a science-fiction show on Netflix used footage of the Lac-Mégantic rail disaster, the mayor of the Quebec town said she believes images of the tragedy were used in a second Netflix production, Bird Box.

No private corporations need worry about this phony event. The defeatist Crown won’t even bother with a phony trial.

Prosecutors weren’t convinced they could obtain a guilty verdict against the now-bankrupt Montreal Maine and Atlantic Railway, Crown spokesperson said.

Of course whatever new Railway company is formed will just be handed the keys to a brand new bypass, no questions asked.

Some hoaxes have massive GoFundMes, some are just massive government wealth transfer programs. This one will set the precedent for billions.

Nearly five years after a train derailed in Lac-Mégantic and killed 47 people, the federal and provincial government confirmed a rail bypass Friday that will ensure trains leave the Quebec municipality’s downtown core for good.

What downtown core does a tiny railway village have?

“There’s nothing we wouldn’t give to go back in the past and avoid being here today to make this announcement,” Trudeau said. “Obviously, we can’t rewrite history, but we can, together, shape the future.”

While the estimated cost is $133 million, the next phase of the study will clarify the final cost of the bypass.

I’m sure the final tally will be many multiples more.

Transport Minister Marc Garneau said the project will encompass 80 pieces of privately owned land. The federal government will approach each of the owners and come to an agreement with them in terms of the value of their property.

Our a$$-true-NOT deep in the deception – I wonder how many plugged in people are among the 80 that will benefit from this land expropriation?

Couillard also said that despite the goodwill of all those involved, a project of this magnitude could not be improvised.

The whole event was perfectly improvised – via a script.

Additionally, the federal government has reached a deal with the Central Maine & Quebec Railway, which will own and operate the new infrastructure.

Is this Crown literally handing over the expropriated land to a private corporation? Isn’t this the definition of fascism?

This blog has been active for 6 years. It’s taken 5 years to get the final tally in this obvious hoax #HRDPAR/NDNGH, one of the first we covered. Note the plethora of occult numbers.

It’s unlikely that any of this money could be justified to re-reroute train tracks. Last time I looked, trains and tracks belonged to private, for profit corporations (even though originally taxpayers probably financed and paid for most of the railroads a few times over).

How else could you get the public to agree to pay for this? STAGE AN EVENT.

Prime Minister Justin Trudeau will be in Lac-Megantic on Friday to announce a rail bypass nearly five years after a train derailed and exploded in the Quebec town, killing 47 people. Sources tell The Canadian Press that Trudeau and federal Transport Minister Marc Garneau will be on hand and that the federal government will assume 60 per cent of the cost of building the bypass. Quebec will take on the remaining 40 per cent. The price tag for the 11-kilometre bypass is estimated at $133 million. I

Copy cat cities could cause a tsunami of money

What is the controlled media (CP/AP/Reuters) trying to tell us? While I am certain that Lac Megantic was a psyOp, hoax, staged media event drill, there are fewer clues with this latest fire. As the numbers settle and a few more images are released, and then articles like this appear, I am more weary that we’re being fooled again.

Yes, there are trust funds and rules and laws ready to be enacted (pre-written?) forcing senior homes to have sprinkler systems installed nationwide (even though they are provincially regulated matters – think peer pressure from the bully in Ottawa with all the marbles).

Major disasters that have struck at the heart of two small Quebec communities in the space of about seven months have some striking similarities.

via L’Isle-Verte disaster has much in common with Lac-Mégantic | Toronto Star.

Looks like the fakists running the Quebec train crash hoax are settling on 47 and 38 (=11) for their final numbers.

On the day that last body was found the head of the Quebec provincial police’s crime scene investigators, Steven Montambeault, cried during interviews as he described sights and smells that he said will haunt him forever.
The number of bodies found could still change, even if the search is over, Lapointe said. The coroner’s office, meanwhile, said it has identified 38 of the bodies and will work to identify the rest.

More ridiculous over the top silly stories about “crying during interviews” (let see them) to tell you how to react.

What are the names of the missing vicsims? Don’t they need any of the public’s help to find them?

The psyOp writers consult fakery sites as part of their job. Apparently they’ve noticed that most are aware that crude oil could not possibly produce fake mushroom cloud nuclear (fake) style imagery.

Enter their cover story to extinguish that fakery inconsistency.

“I’m not an expert in this domain, but it seems that the crude oil reacted in an abnormal way,” Ed Belkaloul told reporters in Lac-Megantic.

“That’s why we took samples — to know exactly what the ingredients are in this crude oil and to know why the railcars blew open like this.”

Just on the heels of my show with Tina tonight Ep50-Plastic Macca’s Tina Foster | radio.abirato.info on Faul/Paul, we have Faul wading hip deep into the Lac Megantic psyOp. No doubt who he works for I guess.

Paul McCartney is reaching out to disaster-stricken Lac-Mégantic, giving free tickets to his Quebec City concert to survivors of the deadly train derailment and inferno. 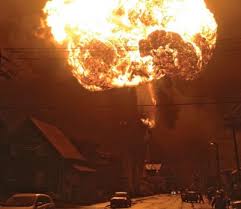