These and other photos are discussed in an audio chat.[ab 1]

Good point made by Seattle Scotsman at Cluesforum:[CF 2]

I'm not sure how many here have any experience with shooting firearms in general (military/LE/country kid), but an always missing element of small arms fire in enclosed spaces, i.e. a school hallway/classroom, is that the report is painfully deafening. An AR firing standard 5.56 mm ammunition emits 165 db, louder than a jet engine taking off or a jackhammer. This is permanent hearing damage levels of noise and yet, all of our brave survivors note no hearing difficulty or even accurately report that after the 1st shot, they were totally deaf. It appears the screen writers get all of their firearms info from movies. Remember a common line from the Pulse op was "Gee, I thought it was just the beat of the music, but Heavens to Murgatroyd it was a crazy man with an evil assault rifle and an IMDB page!"

The suspect has been named:

No Life Flight helicopters requested to fly out.[2]

For the suggestion that David Hogg and Emma Gonzalez were crisis actors "traveling along various crises", Florida district attorney Benjamin Kelly was fired from his job[MSM 11]

GOP Rep. Shawn Harrison tweeted on Tuesday that his aide, Benjamin Kelly, had been let go following the disparaging comments about students who escaped last week's massacre alive. 'Tonight Mr Kelly was terminated from his position as my District Secretary. I am appalled at and strongly denounce his comments about the Parkland students,' he wrote. 'I am again sorry for any pain this has caused the grieving families of this tragedy. The 61-year-old Republican aide came under fire for telling a Tampa Bay Times reporter that two Marjory Stoneman Douglas High School students - Emma Gonzalez and David Hogg - were 'actors' who 'travel to various crisis when they happen'. ‘Both kids in the picture are not students,' Kelly said in an email, referencing a screenshot of Gonzalez and Hogg doing an interview with CNN about stricter gun laws after former Marjory Stoneman student 19-year-old Nikolas Cruz opened fire killing 17 people.

The mother of a student who survived the deadly Florida high school shooting said her family has received death threats in the wake of the tragedy.

“I’m under so much stress,” she told the Post.

The key is in the bolded part. What does someone do who receives death threats? You report this, not to the Washington Post, a “news”paper with no power to do anything against those howwible death threats, but to the police. Then the police can investigate them, find the responsible people for those “death threats” and prove that responsibility and then the case is taken to court. Behind closed doors, without cameras.

That is how real life works.

The fact that Becky didn't go to the law-enforcing police, but to the storytelling media with this -true-or-not- story, means she has no motivation to do something about them and find the responsible people, but as a propaganda prop for the world out there.[ab 3] 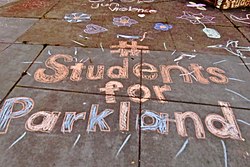