The Superga air disaster was a team DCP plane crash (CEPPAR) psyop taking place on May 4, 1949 near Torino, Italy.

The Superga air disaster occurred on 4 May 1949, when a Fiat G.212 of Avio Linee Italiane (Italian Airlines), carrying the entire Torino football team (popularly known as the Grande Torino) crashed into the retaining wall at the back of the Basilica of Superga, which stands on the hill of Turin. 31 people died; there were no survivors.

So we have half a plane wreck against a wall it allegedly slammed into. But why don't we see any evidence of that crash on the wall itself? This just looks like a prop placed there... And 9/11 planes theory believers, why didn't the plane morph into the wall, Wile E. Coyote-style?

The Avio Linee Italiane Fiat G.212CP was carrying the team home from Lisbon, where they had played a friendly match with S.L. Benfica in honour of the Portuguese captain, Francisco Ferreira. In the incident, the whole Torino team (almost all of the Italy national football team) lost their lives. Club officials and carriers also perished in the accident, as well as the crew and three well-known Italian sports journalists: Renato Casalbore (founder of Tuttosport); Renato Tosatti (the Gazzetta del Popolo, father of Giorgio Tosatti), and Luigi Cavallero (La Stampa). 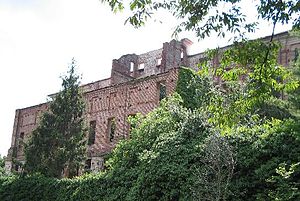 The task of identifying the bodies was entrusted to the former manager of the Italy national team, Vittorio Pozzo, who had called up most of Torino's players to the Azzurri.

Ah yes, because why ask a forensic team to do that, let's just call the former manager...

But our Victor had an easy job, because despite a horrible crash at high speed into a wall, the "bodies" were not broken up in pieces, as bones tend to do when they receive strong impacts, but were neatly placed next to the wreck:

Notice the wall. In the previous photo with the inflated back wheel, we saw that to the right of the impacted wall, it's open space with another wall behind a path. On this photo we see the other side of the wall is completely open.

So where were the photos taken with the inflated front landing wheel, in a confined space with walls to both sides?

As you can see here:

The three-engined Fiat G.212, with aircraft registration I-ELCE, of Avio Linee Italiane, took off from Lisbon at 09:40 on Wednesday, 4 May 1949. The commander of the aircraft was Lieutenant Colonel Meroni. The flight landed at the airport in Barcelona at 13:00. While the aircraft was refuelled during the stopover, Torino met for lunch with Milan, who were directed to Madrid.

What a coincidence. The Last Lunch, someone should make a painting of that!

At 14:50, I-ELCE set off for the Turin-Aeritalia Airport. The weather in Turin was poor; at 16:55, the airport of Aeritalia communicated the weather situation to the pilot - clouds almost touching the ground, showers, strong southwest wind gusts, and very poor horizontal visibility (40 m).

Convenient weather to prepare some props. And at one photo we see people with umbrellas. In the others not anymore.

On approach, the plane lined up with the runway Aeritalia about 9 miles away, at 305 m above sea level, with Pino at 290° off its bow. Just north of Pino Torinese was the Basilica of Superga, situated on a hill at 669 m above sea level. One theory for the deviation is that due to the strong left crosswinds, the plane could have suffered a drift to starboard, which shifted from the axis of descent and lined up with the hill of Superga. Recent investigations also suggested the possibility that the altimeter had malfunctioned and locked at 2000 m, which led the pilots to believe that they were at a higher altitude.

Of course! Or should I say off course?

At 17:03, the plane made a turn to the left, put in horizontal flight, and aligned to prepare for landing, when it crashed into the back of the embankment of the Basilica of Superga. The pilot, who likely believed that the Superga hill was off to his right, would have seen it suddenly emerge directly in front of him (speed 180 km/h, visibility 40 m) and been unable to react. The wreckage did not give any indication of an attempt to go around. The only part of the aircraft which remained partially intact was the empennage.

So if a plane impacts straight into a wall with 180 km/h, how come we have such perfect dumm... I mean bodies?

Apparently I was not the first one to link the two, it has been done on YouTube. In the short video (in Spanish) you see the passport, which even at those days were made of unobtainium! In this video actually the photo of the frontal landing wheel is shown as part of a Copenhagen crash in 1967? But the photos are tagged online as coming from the Superga disaster...

The current remains of the aircraft include a propeller, a tire, scattered pieces of the fuselage, and the personal bags of Mazzola, Maroso, and Erbstein, which are preserved in a museum in Grugliasco near Turin. The Museo del Grande Torino e della Leggenda Granata, hosted in the prestigious Villa Claretta Assandri of Grugliasco, was opened 4 May 2008, the anniversary of the tragedy. 8 of the 18 players (as well as 2 coaches and 1 journalist Renato Casalbore) [makes 11] are buried at the Monumental Cemetery of Turin.

And of course, a memorial, again no planes theory morph physics:

And a nice piece of post-programming by a Benfica fan:

But there's more. Because we have a miraculous case of Final Destination, linking another staged story into the sobbing narrative:[MSM 2]

Forced to leave fascist Italy, Ernö Erbstein and his family survived the Holocaust in extraordinary circumstances before he returned to take Serie A by storm with the Grande Torino. Ernö Egri Erbstein was a pioneering coach who created Il Grande Torino, the great side that won five successive Serie A titles. He was killed with the rest of his squad in the plane crash at Superga in 1949.

According to the Italian Wikipedia, this Erbstein was buried at the Monumental Cemetery of Torino.[MSM 5] But why would a Hungarian jew, ex-Habsburg Army officer,[MSM 2] be buried in Torino and not back home?