Apart from gold and silver, in Vaupés also coltan is mined, "legally" and "illegally".[R 1]

"Coltan (short for columbite–tantalites and known industrially as tantalite) is a dull black metallic ore from which are extracted the elements niobium and tantalum. The niobium-dominant mineral in coltan is columbite (after niobium's original American name columbium), and the tantalum-dominant mineral is tantalite. Tantalum from coltan is used to manufacture tantalum capacitors which are used for portable telephones, personal computers, automotive electronics, and cameras. Coltan mining has financed serious conflict in the Democratic Republic of Congo, including the Ituri conflict and the Second Congo War."[M 13]

"It was not until the early 20th century that niobium was first used commercially. Brazil is the leading producer of niobium and ferroniobium, an alloy of 60–70% niobium with iron. Niobium is used mostly in alloys, the largest part in special steel such as that used in gas pipelines. Although these alloys contain a maximum of 0.1%, the small percentage of niobium enhances the strength of the steel. The temperature stability of niobium-containing superalloys is important for its use in jet and rocket engines."[M 14] 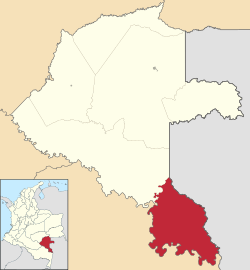 "Miraflores is a town and municipality in the Guaviare Department, Colombia. The municipality was created on February 8, 1990. On August 1998 a Colombian National Police Base was overran by the FARC guerrillas and later rebuilt and reoccupied on February 2004. The population of Guaviare in 1993 was approximately 14,381. The legal economy in the region is mostly based on logging and agriculture, and to a minor scale artisan fishing. Due to the presence of the Revolutionary Armed Forces of Colombia (FARC) guerrilla and other groups involved in the illegal drug trade business, the economy in Miraflores was ruled by coca. The coca paste is sometimes used as currency, substituting the local Colombian peso or the US dollar."[M 18] 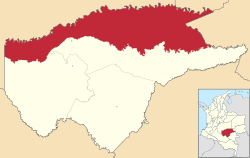 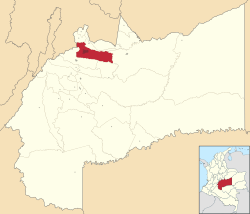