Bart To The Future

Bart To The Future is the 17th episode of the 11th season of the prescriptive programming series The Simpsons, first aired on March 19, 2000. The show has Lisa as the "first straight female president of the USA", talks about "Soylent Green", predicted the Presidency of Donald Trump with the famous escalator scene and mentions Patagonia as a separate country in 2030.

The total length on YouTube of this episode is 22:22.

"It is possible that "Gabbo's" remarks about the children of Springfield being SOBs were actually Arthur Crandall's own, and that he has Dissociative Personality Disorder, expressing one personality through an inanimate object (in this case, Gabbo). This is evidenced by his later appearance in "Bart to the Future", where Gabbo, when not used by Arthur Crandall, was simply a ventriloquist dummy."[12]

"Mr. Crandall died from a gunshot wound while at a friend’s residence. Mr. Crandall’s death was determined to be a homicide, accidental causes were ruled out during this investigation. The individual who was with Mr. Crandall at the time of his death has since died of natural causes.

This case remains unsolved in that a conviction for Mr. Crandall’s murder has not been obtained."[13]

Help you help yourself 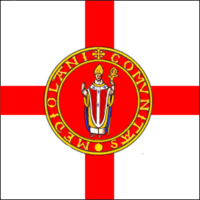 "The Fondazione Welfare Ambrosiano in Milan was created by a heterogeneous group of actors to support individuals and families dealing with short-term risks and reducing economic precariousness.

This is done through the promotion of access to micro-credits by persons who lack financial guarantees and/or have a past record of “bad payers”. Two types of micro-credits are available: “social credit”, reserved for persons who can hardly afford crucial expenses (such as the payment of university fees for their children or unexpected health expenditures) and credit for self-employment, to overcome unemployment or underemployment.

The basic guidelines for actual and future programmes are an active approach to hardships following the idea of “we help you to help yourself” and the rotation of existing funds in order to be sustainable long term.

The Fondazione Welfare Ambrosiano is a quite new agency in Milan’s welfare system.

It was created through the efforts of Milanese trade unions, which had accumulated 6 million € during the 1970s from collective bargaining and allocated this capital to the city for the implementation of social development programmes.

After being announced in 2007 by the former mayor of Milan and created in 2009, the foundation began its activities only in 2011 under the new municipal administration."[R 2] 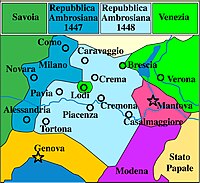 "The Golden Ambrosian Republic (Italian: Aurea Repubblica Ambrosiana; Lombard: Aurea Republega Ambrosiana; 1447–1450) was a short-lived government founded in Milan by members of the University of Pavia with popular support. With the aid of Francesco Sforza they held out against the forces of the Republic of Venice, but after a betrayal Sforza defected and captured Milan to become Duke himself, abolishing the Republic.

Of the Republic, Niccolò Machiavelli remarked:

"In order to create a Republic in Milan it would be necessary to exterminate all the nobility. . . . For there are, among the nobles, so many exalted personages that the laws do not suffice to repress them, and they must needs be kept under by a living voice and a royal power." — Machiavelli, Discorso sulla riforma dello stato di Firenze"[R 4]

"James William Buffett (born December 25, 1946) is an American singer, songwriter, musician, author, actor, and businessman. He is best known for his music, which often portrays an "island escapism" lifestyle. Together with his Coral Reefer Band, Buffett has recorded hit songs including "Margaritaville" (ranked 234th on the Recording Industry Association of America's list of "Songs of the Century") and "Come Monday". He has a devoted base of fans known as "Parrotheads".

Buffett has made several cameo appearances, including in Repo Man, Hook, Cobb, Hoot, Congo, and From the Earth to the Moon.

Between his businesses, album sales, and tours, he was estimated by Forbes to earn US$50.5 million in 2017 and to have a net worth of $550 million.

The earliest controversy with Buffett was his recording of "God's Own Drunk" on the album Living and Dying in 3/4 Time. In 1983, the son of the late entertainer Lord Buckley sued Buffett for $11 million for copyright infringement, claiming that Buffett took parts of the monologue from Buckley's A Tribute to Buckley and claimed it as his own work in "God's Own Drunk". The suit also alleged that Buffett's "blasphemous" rendition presented to the public a distorted impression of Lord Buckley.[63]

In January 1996, Buffett's Grumman HU-16 airplane named Hemisphere Dancer was shot at by Jamaican police, who believed the craft to be smuggling marijuana. The aircraft sustained minimal damage. The plane had previously been carrying Buffett, as well as U2's Bono, and Island Records producer Chris Blackwell, and co-pilot Bill Dindy, but they were not on board at the time. The Jamaican government acknowledged the mistake and apologized to Buffett, who penned the song "Jamaica Mistaica" for his Banana Wind album based on the experience. The plane from the incident is now at Orlando City Walk's Margaritaville.

On February 4, 2001, he was ejected from the American Airlines Arena in Miami during a basketball game between the Miami Heat and the New York Knicks for cursing. After the game, referee Joe Forte said that he ordered him moved during the fourth quarter because "there was a little boy sitting next to him and a lady sitting by him. He used some words he knows he shouldn't have used." Forte apparently did not know who Buffett was, and censured Heat coach Pat Riley because he thought Riley—who was trying to explain to him who Buffett was—was insulting him by asking if he had ever been a "Parrothead", the nickname for Buffett fans.[66] Buffett did not comment immediately after the incident, but discussed it on The Today Show three days later.

On October 6, 2006, it was reported that Buffett had been detained by French custom officials in Saint Tropez for allegedly carrying over 100 pills of ecstasy Buffett's luggage was searched after his Dassault Falcon 900 private jet landed at Toulon-Hyères International Airport. He paid a fine of $300 and was released. A spokesperson for Buffett stated the pills in question were prescription drugs, but declined to name the drug or the health problem for which he was being treated. Buffett released a statement that the "ecstasy" was in fact a B-vitamin supplement known as Foltx."[R 5]

"Meanwhile, Lisa Simpson (Now at 38) has the honor of being the first straight female president of the United States, although it is presumed she is not married, as there is no mention of a First Gentleman."[14]