The Munich massacre was an attack during the 1972 Summer Olympics in Munich, West Germany, in which the Palestinian terrorist group Black September took eleven Israeli Olympic team members hostage and killed them along with a German police officer.

Shortly after the crisis began, a Black September spokesman demanded that 234 Palestinian prisoners jailed in Israel and the German held founders of the Red Army Faction, Andreas Baader and Ulrike Meinhof, be released.

Black September called the operation "Iqrit and Biram", after two Palestinian Christian villages whose inhabitants were expelled by the Israel Defense Forces (IDF) during the 1948 Arab–Israeli War. The Black September commander, Luttif Afif, was born to Jewish and Christian parents. His group was associated with secular nationalism, working for the rights of Palestinians in Israel.

Police officers killed five of the eight Black September members during a failed attempt to rescue the hostages. A German policeman was also killed in the crossfire. The other three Palestinian hijackers were captured. The next month, however, following the hijacking of Lufthansa Flight 615, the German government released them in a hostage exchange.

Shot during the initial break-in 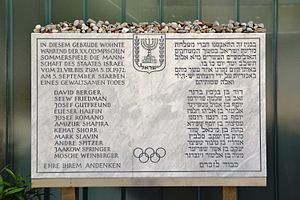 Memorial plaque in front of the Israeli athletes' quarters.

Munich Massacre by Mark Podwal, published in The New York Times in 1972