On 21 February 1970 HB-ICD a Convair CV-990 Coronado jet named “Baselland” was flying on the route with 38 passengers and nine crew members. A bomb detonated in the aft cargo compartment of the aircraft about nine minutes after take-off climb-out on southerly course approximately at 12:15 UTC in the area of Lucerne north of the St. Gotthard Pass. The crew tried to turn around and attempt an emergency landing at Zürich but had difficulty seeing the instruments due to smoke in the cockpit. The aircraft deviated more and more to the west and crashed a short time later in a wooded area at Würenlingen near Zürich, Switzerland, due to the loss of electrical power. All aboard the aircraft were killed.

A Government air inspector was flown to the scene in a helicopter. He was followed shortly afterward by a team of 50 investigators. The police said that a woman handed in a 9-mm. pistol found at the scene of the crash immediately after the disaster. Some of the wreckage, including pieces of cloth, was strung out on the tops and branches of trees.

Sabotage was immediately suspected here because of the anger caused in Arab countries by the sentencing the previous December of three Palestinians to 12 years imprisonment by a Swiss court. An Arab guerrilla splinter group, the Popular Front for the Liberation of Palestine - General Command, said in Beirut, Lebanon, that it had been responsible for the explosion. Reuters reported later, however, from Amman, Jordan, that a spokesman for the guerrilla group had denied that it was involved.

Monument at the crash site of Swissair flight 330 near Würenlingen, Switzerland 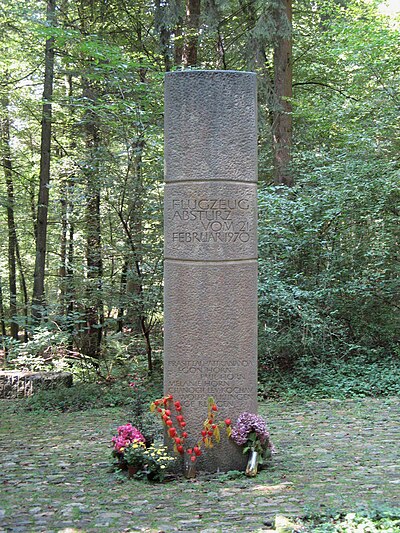