Tiwanaku and Puma Punku are famous archeological sites on the Altiplano of southwestern Bolivia. They are located southeast of the present-day water levels of Lake Titicaca, South America's largest lake.

These artefacts have been studied for years and it seems a mystery how the 90 degree angle clear cuts at these sites were made.

Tiahuanaco, on Lake Titicaca in Bolivia, is a village known throughout the world for its mysterious Gate of the Sun, ruins of temples and its pyramid. Archaeologists consider that this site was built well before the Incas, around 600 to AD 700. The site of Pumapunku is right next door with the ruins of an enigmatic pyramidal temple built at the same time. Because it is not restored and developed for touristic activity, it is less known to the general public.

However, there are two architectural curiosities there: four giant red sandstone terraces weighing between 130 and 180 tons and small blocks of andesite, an extremely hard volcanic stone, whose complex shapes and millimetric precision are incompatible with the technology of the time. And for good reason, since archeology tells us that the Tiwanakans had only stone tools and no metal hard enough to carve the rock.

But they would have carved the gigantic blocks of red sandstone (these ancient blocks are the largest of all the American continent!) and they were able to carry these hundreds of tons on the site, then to adjust them precisely. Also, they would have been able to carve other smaller blocks made of volcanic andesite, an impossible-to-carve stone with an incredible finish! Archaeologists cannot give any rational explanations on how this was possible. Therefore, for the general public, the assumptions generally advanced to explain these wonders are the achievement by a lost ancient super civilization or by aliens' involvement.[GP 2]

"Tiwanaku (Spanish: Tiahuanaco or Tiahuanacu) is a Pre-Columbian archaeological site in western Bolivia near Lake Titicaca and one of the largest sites in South America. Surface remains currently cover around 4 square kilometers and include decorated ceramics, monumental structures, and megalithic blocks. The site's population probably peaked around AD 800 with 10,000 to 20,000 people.

The site was first recorded in written history in 1549 by Spanish conquistador Pedro Cieza de León while searching for the southern Inca capital of Qullasuyu.

Some have hypothesized that Tiwanaku's modern name is related to the Aymara term taypiqala, meaning "stone in the center", alluding to the belief that it lay at the center of the world. The name by which Tiwanaku was known to its inhabitants may have been lost as they had no written language. Heggarty and Beresford-Jones suggest that the Puquina language is most likely to have been the language of Tiwanaku."[M 1] 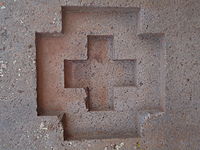 "Pumapunku or Puma Punku (Aymara and Quechua puma "cougar, puma," punku "door"; Hispanicized Puma Puncu) is part of a large temple complex or monument group that is part of the Tiwanaku Site near Tiwanaku, in western Bolivia. It is believed to date to AD 536 and later.

Tiwanaku is significant in Inca traditions because it is believed to be the site where the world was created. In Aymara, Puma Punku's name means "The Door of the Puma". The Pumapunku complex consists of an unwalled western court, a central unwalled esplanade, a terraced platform mound that is faced with stone, and a walled eastern court.

At its peak, Pumapunku is thought to have been "unimaginably wondrous," adorned with polished metal plaques, brightly colored ceramic and fabric ornamentation, and visited by costumed citizens, elaborately dressed priests, and elites decked in exotic jewelry. Current understanding of this complex is limited due to its age, the lack of a written record, and the current deteriorated state of the structures due to treasure hunting, looting, stone mining for building stone and railroad ballast, and natural weathering."[M 2]

The Bennett monolith was found in an underground temple at Tiwanaku in June 1932 by Wendell Bennett of the AMNH in NYC. On April 25, 1933, transportation of the stele would commence, but not finish until July of the same year.[M 3] 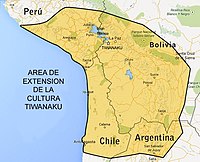 Not many petrographical analyses have been performed on the stones used at Tiwanaku and Puma Punku. Davidovits et al. (2018) analyzed samples from the red sandstones and the grey andesites and propose that both are created with artificial geopolymers.

Joseph Davidovits, his son Ralph and a Peruvian geologist Luis Huaman of the Catholic University of Arequipa, Peru, propose both lithologies of the sites of Puma Punku and Tiwanaku (sandstone and andesite) are geopolymers; artificially made cements of mixtures of sediment, cements as kaolinite and lime and authigenic albite in the andesites.[GP 3]

He presents his findings in this video.[GP 1]

All papers and conference presentations were done by Joseph Davidovits, his son Ralph and a guy named Luis E. Huamán. According to Researchgate, who got the information directly from the authors, this Luis E. Huamán works at the Luleå University of Technology in Luleå, Sweden.[GP 5] But Google cannot find any "Luis E. Huamán" or any Huamán on their website. Who is this guy?

This website lists several sites in the world they propose are built using geopolymers:[GP 4]