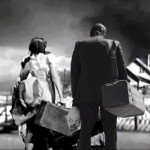 Star Wars is a metaphorical camera obscura it reverses 911 into characters living twins,instead of buildings etcetc, coincidently the early egyptian ones looked similar to Kubrick's monolith, and calling c3po human cyborg relations is the same as saying oil and petrol is what keeps the machines going, hence OPEC backwards, is c3po, , worked this out years ago, and got annoyed with houseclowns, talking bull . trouble is the trick is easy to show , ok here goes a child plays with a toy and experiences joy, years later the same imagery causes pain ?? give up ok , the millennium falcon space ship brought joy . sep 11 brought pain they both are visually the same . stand at the base of the twin towers and look up and the towers and panorama make the millenium fall-con (911), c3po ,s job description is human cyborg relations, opec ( oil,producing.european .countries which is c3po backwards controls the worlds oil distiribution, same story . tatooine in star wars becomes tatwin(twin. so that should explain a little of what i mean , visual prompting of a bad event via good story,,,,,,,,,same as fairy tails right batman movies from nolan secret initations, double helix caves in china with bacteria carved into walls, the mob and police helpless to act, two faced politicians, the batman doest care about borders, a child without fear makes the jump look easy , holding new york gotham to ransome with human triggers, and on and on all the way to oz i told you all wizards get their wand praised now it may be a coincidence that nolans trilogy of batman films just by accident covers fear being used as a weapon or that a bat with that doesnt recognise borders or constitutional rules, ill just keep adding winkydinks, joker dressed as a medical professional shuts down the hospitals of gotham, dancing nurses, bat virus, the pit which has bacteria etched into the walls batman climbs out of dressed as a blue cunting mason, a child with no rope umbilical cord)is how to escape the pit of fear , diesel poisoning of a two faced politician ,covid will be blamed on diesel so long diesel gothamites not allowed to move because of a masked man w.h.o. says anyone of them could be a human trigger, clapping at 2001 gmt, smh, the jaucir dressed as a nurse shut down the mob and the police, so did bane the masked man from wuhan ,the scarecrow strawman used toxins to poison gotham so thats batman films, made by nolan incidentally tenet nolans latest shows red and blue teams blowing up a tower (trump) thus acheiving nothing but destruction and resolution that fate is unchangable ( election2020 (interstellar) is a work of genius and the gullible ape piloting into a psi fi wet dream black hole is good ( same visuals as were expected to belive a virus phage takes lol( fancy a time travel film with the power of love as a narrative ( not a theme = huey lewis should sue), but lets get it straight the wizard (film maker is given key words and images to incorporate in a film or in nolens case the entire covid script is in batman 123 but interstellars social distancing the dying planet earth narrative and last but not least michael caines deathbed confession is so close to pasteurs its not even funny,