Translation from Russian of the article "The Vatican Gold Rush": https://www.eg.ru/tech/science/46819

The well-known Russian researcher, author of the "Logistic Theory of Civilization" Igor Grek was always amazed at the illogicality of the actions of the Inquisition. Why would the Vatican burn thousands of women all over Europe under a clearly far-fetched pretext? There is no economic or political benefit from this, and for the Catholic Church, such behavior was unacceptable even in the dark Middle Ages.

He found a sensational answer by "decrypting" the instructions of the Inquisition to identify "witches."

The instructions issued for the investigative apparatus of the Holy See contain completely sane recommendations on the investigative technique in the spirit of the legislation of that time, and many of them have not lost their significance today. However, the sections dealing with the expertise to identify the authenticity of the "witches" seem frankly delusional. The Middle Ages, of course, were dark, but not as idiotic as they might seem if everything written is taken at face value. The true goals of the Inquisition were economic in nature. And the fight against heresy was in many ways a cover, as is now the "democratic values" for the US bombings all over the world.

The truth in all its simplicity was revealed to Igor Grek when he saw that the instructions of the Inquisition to identify the "witch" would completely coincide with the methods of establishing the sample of precious metals according to the "Assayer's Guide". And if you replace the word "witch" with "counterfeit coin" in the records of the Inquisition, then everything falls into place. Let's compare and we, too, and then we will understand what was burned at the stake all over Europe. 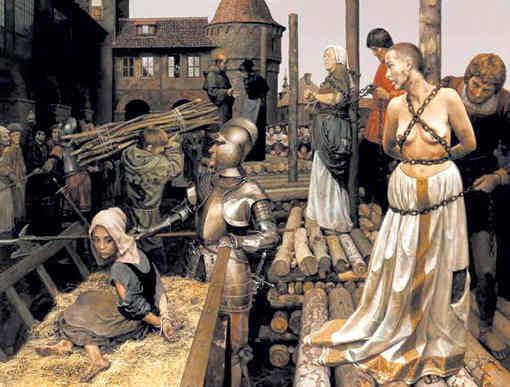 The Catholic Church readily supports stories about the horrors of the Inquisition and even publicly repents in order to hide its main secret from the people - the pursuit of money.

The iron test is characteristic only of the early Middle Ages. The "witch" had to not get burned by holding a red-hot bar of iron in the palm of his hand for several minutes. It was believed that God would protect the innocent in such a situation, and even legendary examples of acquittals were given!

In fact, this means that a coin made of pure silver will not melt, "it will last a few minutes without damage", since iron heated to a light red color has a temperature of 830-900°С, and pure silver melts at a temperature of 960°С. All alloys with a silver content below 91 percent begin to melt at the same temperature - 779°C.

The conclusion was as follows: if the coin, when heated for several minutes with a red-hot iron, "did not get burns", did not melt, then it is real. Assay needles. The very ones with which they pricked the coin, checking its authenticity. From them went the story about the search for moles in witches.

It was believed that the devil marks every witch who got confused with him with his sign. This mark, called the "witch mark", was sought by the judges. In order not to view it, the accused was shaved off her head and body. One had only to find any suspicious areas of the skin, for example, age spots or moles, as the executioner pierced them with a needle. If the suspect did not feel pain or bleed, it was considered proven that the stain was indeed a "witch's mark."

In the "Assayer's Guide" this mystical interpretation corresponds to the very widespread to this day ancient method of determining the sample of items made of precious metals with assay needles. They are made of gold, silver and copper of a certain composition, that is, they are reference samples of the precious metal sample.

The simplest use of assay needles is to scratch the surface of the test object. The higher grade alloy needle is softer and will not leave marks.

Thus, the mystical expressions "did not feel pain" and "did not come out blood" mean that the assay needle of the sample, which should be in the coin alloy, does not leave a scratch. This means that the alloy of the test coin is harder due to the greater amount of other metals. 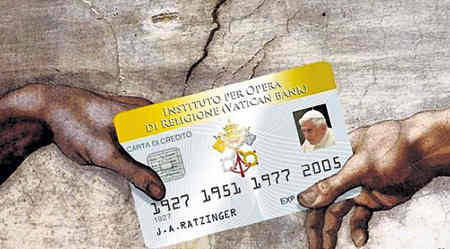 The direct heir to the "Inquisitio Haereticae Pravitatis Sanctum Officium", that is, the Inquisition, is today the "Institute for the Works of Religion". This is the scientific name of the Vatican Bank, where they also hunt for "witches"

The "test of tears" was also considered an unmistakable way to recognize a witch. In The Hammer of Witches, this test was recommended to the judges as particularly reliable. It was believed that witches cannot shed tears. A woman who does not cry even under torture is most likely a witch.

In the assayer's manual, this is called a "drop test". It is about establishing a sample of a precious metal using special reagents. A drop of reagent is applied to the product and a conclusion is made about the amount of gold content by the color of the spot. The color of the reaction products, the assayer, as it is said in one manual on jewelry, compares only "with his own feeling", so the error can reach 30 or more sample units. There is also a "wet test" - a test of the silver content in the alloy, which consists in separating silver from a nitric acid solution with a titrated solution of sodium chloride. Presumably, this method was adopted from the Arabs and spread throughout Europe in the 13th century.

Most likely, the "test of a witch with crying, tears" meant the "drip method". The judges knew what they were talking about, and it’s even useless for the rest to tell, they still wouldn’t understand, however, and now it’s not much better... 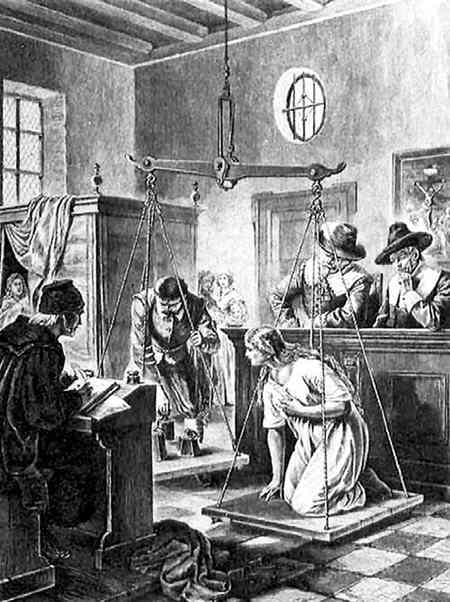 If we take into account that in fact, instead of the lady, gold was weighed, then, of course, it should weigh no less than indicated in the denomination. Otherwise it will be recognized as a fake, or rather a "witch"

The balance test was much more humane. So, in the Dutch city of Oudewater, everyone who was heavier than a certain limit was acquitted, and even issued a certificate confirming innocence of witchcraft. The percentage of those exposed was negligible. Naturally, the subjects were forced to strip to their shirts and searched for hidden weights.

Now in the Dutch city of Oudewater there is a museum "Witches' scales" with the service of weighing women and the issuance of a "certificate", and the lower limit is 49.5 kg. Well, would tourists just as willingly go to the museum if it was honestly called what it was called before - "Oudewater weigh house", and there they talked about the history of metrology, the difficult path of standardization and unification, certification of weights and measures?

In the case of the Oudewater weigh house, the term "witch" also refers to trading weights. They were checked, branded and issued a certificate of conformity. There was no fundamental difference between coins and weights, since coins were "counted" by weighing in the same way as copper coins in the USSR: one kopeck is one gram, and five kopecks is five grams. 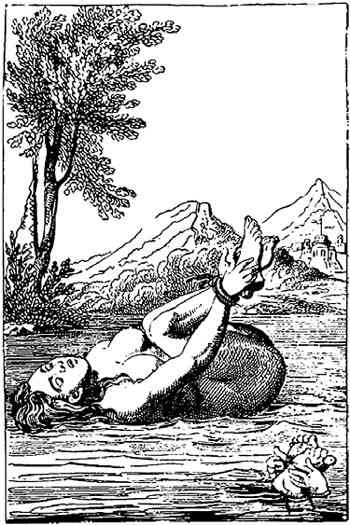 The engraving shows that the tested "women" were allegedly lowered into the water in pairs. The "witch" floated up, and the honest one sank

One of the most accurate and therefore favorite tests was the "trial by water" or "swimming test". To do this, the executioner tightly tied the arms and legs of the naked woman, tied her body with a rope and pushed her into the water. If she floated to the surface - and this happened with the majority, then she was recognized as a witch, because water, the element of purity, did not accept her.

Even if one does not go into physics, the common opinion suffers from logic: if a woman thrown into the water floats up, then this is a witch and she must be destroyed, and if she drowns, then she is normal.

The reality is much more interesting: "water test" refers to the method of hydrostatic weighing, a stunningly elegant way of comparing the specific gravity of substances. Weighing on an equal-armed balance - "weighing test" - can only establish the equality of the weight of the tested coin with the reference one. But if these coins suspended on the balance beam are lowered into water, then in the case of a lower density of the test coin due to impurities of lighter metals, the equilibrium will be disturbed, and the “damaged” “witch” coin will float up, and the reference one will sink.

For greater sensitivity, it is required that the coins are not on the scales, but simply tied to the rocker arms with the thinnest possible thread. That is why in all sources on witches it is specially stipulated that they must be tied crosswise "with the right hand to the left leg and vice versa." A special mention of undressing a witch before the test means cleaning from dirt, extraneous layers.

The sensitivity of this method is extremely high also due to the fact that such a test of a precious metal sample is non-destructive. Unlike assay needles and drip samples. It was adopted by museums, including the Hermitage, only, of course, with more sophisticated equipment. 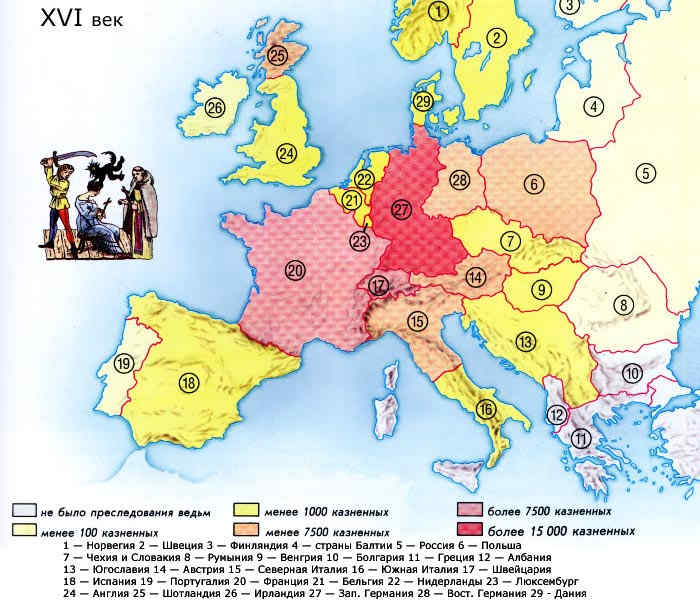 Map of the intensity of the pursuit of witches in Europe during XVI century (according to modern official documents). As we see, the most active pursuit of witches was in West Germany, Switzerland and France - the most developed regions. Well, let's at least compare Italy: in the progressive north, it is much more active than in the backward agriculturally south. If it were the backwardness of the thinking of the people, then everything looked strictly the opposite.

Now, knowing the true state of affairs, one can understand with understanding the old illustrations, which the uneducated people have always taken for historical chronicles. Hearing the ringing, but not knowing where it is, Europeans in the early 19th century actually threw women into the water to test for witchcraft, for which they were justly punished by the authorities.

According to Igor Grek, the Inquisition was a medieval analogue of Interpol, whose main task was to fight counterfeiters. After all, the Pope for many centuries has been an absolute European monarch, appointing kings and regulating the entire foreign and domestic policy of the continent. Financial control was one of the top priorities here. We see this in the example of today's European Union.

The Holy Inquisition burned "witches" - but they were not women, but counterfeit coins!

Yes, and people were burned too. So, the secular authorities dealt with criminals, some of whom were convicted of making forgeries and handed over to the courts by the Inquisition. But all their witchcraft consisted only in an attempt to financially deceive the Vatican, that is, to encroach on sacred things. And in this case, the Pope is no different from the Godfather.

Re: The witches hunted by the Inquisition are not people, but fake coins

Very interesting article. I'll put it on my "history is a lie " list....