Here are a few Video's i have done on this subject

Here are a few Video's i have done on this subject

The first is "BIG Mike" as this is one that most can see from a Mile away as "his" back would still block the Sun.


Michelle Obama is a Man, I say yes, Final answer. BIG MIKE is due to COME out SOON

the second one i did with 2 "songs" included....Prince (ss) Kate

Prince_cess Kate A _Queen_ in waiting. Kate Middleton Was Born a Man STAY for the SONGS at the end i wrote*

Truly a "q"ueen in waiting

from waht i see being pushed by some people ,can't say if they are masons or not ,so i won't point fingers .

but to recreate heaven on earth or the stars brought down metaphorically that is ,is trying to one up god .

it's the basic teachings of hermes trismegistus ,and the the reason they lie about space ,so this two becomes one or mixing man with woman is still to me a lie ,the goal will and always be to make you see what they want you to see.

but they model their story on the heavens thus acheiving two goals ,deception and wonder ,both falsely attained.

but not from god down to earth ,from man to man ,with only them knowing the story and it's implemetation.

and falsely accusing people of being trannies and saying all the plattitudes ie two become male and the female is obfuscating the act of what god is said to have done with jesus, i have never read the bible as you know ,but i can spot masons a mile off.
Top

Do you know what date/year you first did those? Is it 2 years, as indicated on brighteon?
Top

I wonder if anyone really wants to know how bad it gets?
Top

The Church of England has said it doesn't have an "official definition" of a woman.
https://www.lbc.co.uk/news/church-of-en ... f-a-woman/


Dr Robert Innes, a senior Bishop at the Church of England, said the meaning of the word woman was previously "self-evident", but now "additional care" was needed.

He added there are now "complexities associated with gender identity".

The query was put to the senior Bishop in written questions to the General Synod, the Church’s legislative body, amid an ongoing debate surrounding what defines a woman, the Telegraph reports.

A lay member of the Synod and a representative of the Royal Navy, asked: “What is the Church of England’s definition of a woman?”

In his written response, the Bishop in Europe said: “There is no official definition, which reflects the fact that until fairly recently definitions of this kind were thought to be self-evident, as reflected in the marriage liturgy.

The reason the Church of England cannot define a woman is because the monarch is the head of the church. So do you serve the King, do you serve God, or do you just shut-the-fuck-up and pretend you haven't got a clue?
Top

@napoleon, do you see the Church of England is actually giving us a positive answer if we read between the lines.


There is no official definition, which reflects the fact that until fairly recently definitions of this kind were thought to be self-evident, as reflected in the marriage liturgy.

This from two days ago.

MPs hit out at Church of England for failing to permit same-sex couples to marry in churches - but Archbishop of Canterbury defends 'huge step' in allowing blessing of civil marriages
https://www.dailymail.co.uk/news/articl ... rches.html


MPs today hit out at the Church of England for not allowing same-sex couples to marry in its churches.

The Church was accused of 'cruelty', 'hypocrisy', 'discrimination' and of treating gay people as 'second-class citizens' during exchanges in the House of Commons.

It was also questioned how 'meaningful' a recent apology by the Church to LGBTQI+ people would be, if it maintained its stance on same-sex marriage.

The issue was raised in an urgent question in the Commons this afternoon after the Church last week said it would bless same-sex civil marriages for the first time.

The Bishops of the Church of England have also written an letter formally apologising for the 'shameful' times LGBTQI+ people have been 'rejected or excluded'.

But there has been anger at the Church's refusal to change its position on gay marriage, with same-sex couples still unable to marry in its churches.

Justin Welby, the Archbishop of Canterbury, tonight defended the Church's decision to allow the blessing of same-sex partnerships as a 'huge step'.

He admitted the Church was 'deeply divided' on the issue and revealed he had received 'flak' from opponents of the 'controversial' decision to allow blessings.


Brian Gerrish from UK Column is of the opinion Justin Welby is part of the dark arts. It is clear that every successive Archbishop of Canterbury in my lifetime under the Queen's rule have dragged the church and its members closer to hell. And you only have to hear ten minutes of dialogue from the UK Parliament to realise it is full to the brim with satanists.

So going back to the thing the church wouldn't be moved on. If we know the Church DOES NOT marry same-sex couples, what is the ONLY logical conclusion we can come to if Kate is indeed a man?
Top

marriages are unions ,accords, i don't see catholic divorce lawyers not trying to fleece the man or woman ,i don't see the church popping round to babysit so the parents can have a night out ,or offering to use their wealth to pay for things for married couples,sorry i went off.

do you know what rachel ,i don't like the church i have witnessed in the past hundred years doll.

quickly touch on will and whats her name kate ,it was on t/v/,and that is entertainment.
she looks like a woman to me aswell,dont think she was pregnant mind you.

back to the innitial question reading between the lines , the amount of gay bishops has always been high


i don't think i can answer that question ,i know the lowest percentages of all people is the same sex or lgbtq crowd ,and then the percentage drops even more for the ones brought up in a religious environment, hmm ,so reading between the lines is me making the same guess as you ,the church has a new faith in the pipeline pun intended , a break down of denominations into one big malestrom ,like what russia will be in 20 years ,ooh

i'm gonna have to let that ruminate for a few days chuck.

you do ask good questions xxxxxxx

i was concentrating on whatever crisis will be implemented ,and just assumed the church would transition , they are the wealth as it were ,

let that sit with me ,
Top

The main impressive magic they have performed is, not only that no one has got a clue what Christianity is these days, it's that they don't know what Satanism is either. The music industry is probably the biggest promoter of false satanism.

The NINTH commandment in full, Exodus 20:16

Thou shalt not bear false witness against thy neighbour.

This is why Jesus gave the Pharisees such a hard time with their hypocrisy. Everyone is your neighbour, the brotherhood of man, do not lie to anyone, that is what the commandment meant. Whereas the Pharisees CHOSE to read the law as, "I will not lie to my neighbour, but these people are not my neighbour, therefore I can lie to them freely. And this is why the Great Commission was taken from them. And hey, that's the mindset we find ourselves living in today. But the commandment was written that way on purpose, it is the tree in the midst of the garden, it was set in such a way to reveal the hearts of men.

There is little wonder why this commandment was placed at NINE once you see the pattern. The Pharisees probably thought, it's at nine therefore the others are far more important. No, it was placed at nine because of what nine represents.

The significance of the number nine are the precious stones that made up Lucifer's covering in Heaven before his fall. If we go back to the Ephod breast plate, it has twelve stones which represents the twelve Jewish tribes. 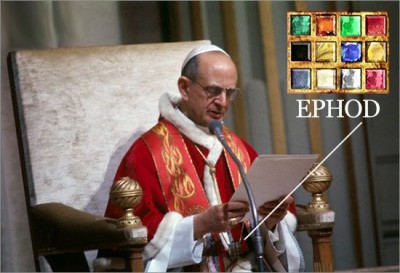 There is some argument on what the stones actually were, the KJV lists diamond as one of the stones, but rather it is a diamond-like stone, as diamond itself could not have been cut. Never-the-less, however they are translated we can see Lucifer's covering uses nine of the twelve names for the precious stones listed on the Priestly breastplate. 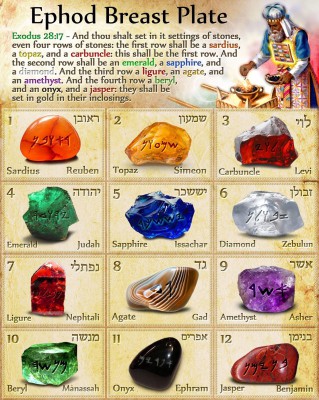 @dave j, your videos, particular the mind computer and the perspective one where you are by the freeway looking at the different planes, they got me thinking about where we live in a totally different way.

We live in a strange place.
Top

Just a short comment on the spelling* here.
-
Nobel - Noble (phonetic anagram)
-
So, when realize there is such a thing as 'Noble Lies', we might suspect the tongue in cheek with the 'Nobel Prize'...
—
* noble is also interesting for the presence of the Bell/Baal/Ball of course (no Baal i'd say, just a plane)
-
deception by design
Top
Post Reply
13 posts