Politicians having their death faked

As well as employing his wife Julia as part time secretary/case worker, we read the following:

Until further notice, I am Parliamentary Adviser to the Caravan Club, East Grinstead House, East Grinstead, West Sussex RH19 1UA. I receive £6,000 a year in return for an expected commitment of 100 hours. (Updated 5 June 2015)

Not bad, £60 an hour for "caravanning advising" [whatever that consists of] Must be highly skilled work. Whom has that essential work been passed onto?
Caravanning is becoming much more popular these days as people hit the road and disappear under the radar.
Top

How on earth is the proposal to end online anonymity linked with the supposed killing of David Amess, known colloquially at this stage as "David's Law"?

Apparently, MPs are all allegedly expecting to be killed because they are, er, MPs. Apart from nodding through oppressive and tyrannical legislation, they see to do very little apart from collect a lot of money for being "safe' and virtue-signalling mask wearing, the useless lot.
https://www.spectator.co.uk/article/the ... vid-s-law-


Their job requires them to mix with the public and that involves a certain level of risk.

Rather like bus drivers, doctors, dentists, or shop workers I guess.


If the current sense of danger persists, more and more good people will decide that they cannot subject their families to the risk that political service now incurs.

because of the "deaths" of Jo Cox and David Amess, I guess.

Another change many MPs would like to see is an end to internet anonymity. The Tory MP Mark Francois argued in the Commons that this would be a fitting tribute to Amess, a ‘David’s law’ which would help restore some civility to politics. Francois suggested that the government’s forthcoming ‘online harms’ legislation provides an obvious vehicle for this.

Does anyone see a connection? No?

Correction - the funeral is indeed on a Tuesday, the 23rd November, not the 26th,mea culpa, which is a Friday.
Apparently the funeral is by ticket only - they don't want the average faithful wandering in as can happen at any normal requiem mass.

However, the funeral will be live streamed, but at the moment there doesn't seem to be any link to live streaming on the cathedral website
https://www.westminstercathedral.org.uk/news.php

I would guess the [empty] casket will be received into the Cathedral the previous day.


Sir David Amess MP, who died in October, was involved with the All-Party Parliamentary Group for Funerals and Bereavement (APPG) for some years and had held the post of vice-chair.

I would also guess a firm from Milton Keynes, prop John O'Looney, didn't get the job.


Jeremy Field, Managing Director of CPJ Field ** and a Past President of the National Association of Funeral Directors, worked closely with Sir David on the APPG and paid tribute to his passion as an MP....Sir John Hayes MP, Chair of the APPG and a good friend of Sir David....,

** based in Burgess Hill near Brighton, Sussex.

Sir John has recently written to the criminals in charge of our current "health emergency" asking for guarantees that one will not need a vaxx passport to attend a funeral
https://www.appgfunerals.co.uk/letter-f ... rt-scheme/
.....[one can see that coming, another piece of coercion to get inducted into the cult]

We are therefore seeking reassurance that funerals are exempt from the proposed vaccine passport scheme and will not be classified as mass gatherings.

Sounds like the "proposed" passport scheme is a slam dunk.
Top

That Ai further back in this thread Ive seen it used on the YT channel by a transpicious chap named "Limmy" where he chats to the camera as himself but the video produces a credible (but not 100% convincing) elderly version of him/her(?)
Top

David Amess - a man with TWO FUNERALS! Which one if the real one? Answer - probably neither.

At short notice, a funeral the day before that already announced will take place in Southend on Sea, adjacent to his constituency.
https://www.southend.gov.uk/news/articl ... e-unveiled
It will be celebrated in an Anglian church, with two celebrants, one Catholic [as at the following day's service in London] and the other the local Anglican parish priest in Prittlewell, part of Southend.
https://www.southend.gov.uk/news/articl ... e-unveiled


The memorial funeral which will take place at St Mary’s Church, Prittlewell, on Monday 22 November and be led by Reverend Paul Mackay and Rev Monsignor Kevin William Hale, is a family affair and strictly invitation only.

Following the service, which will start at 1pm, the casket will be carried in a horse-drawn hearse through Southend’s streets, pausing outside the Civic Centre in Victoria Avenue and Iveagh Hall, Sir David’s Southend West Conversative Constituency office, in Leigh Road.

From 12 noon, BBC Essex will broadcast a special programme presented by Dave Monk remembering Sir David. The show will include the memorial service broadcast live from 1pm.
BBC Essex can be accessed via Essex - Listen Live - BBC Sounds or on FM radio frequency 103.5 FM or 95.3 FM.

One imagines this will be a photo-op using an empty casket. Probably a good pay day for the tight-lipped funeral parlour.
The casket "pass-by" will be reminiscent of the fake Jo Cox funeral cortege which didn't seem to result in any cremation or burial. Well, recycling is key these days.

Will there be another casket in Westminster? Or will that be more of a "memorial" mass?
Top

I think this piece by SkyNews sums it all up, with photos of the horse-drawn casket runaround in Southend on Sea, draped in union jack, and the second funeral the next day at Westminster Cathederal, with an expensive oak casket carved with images of the Last Supper, and attended by the whole cast of the useless puppets of the UK political system.
https://news.sky.com/story/sir-david-am ... l-12476395 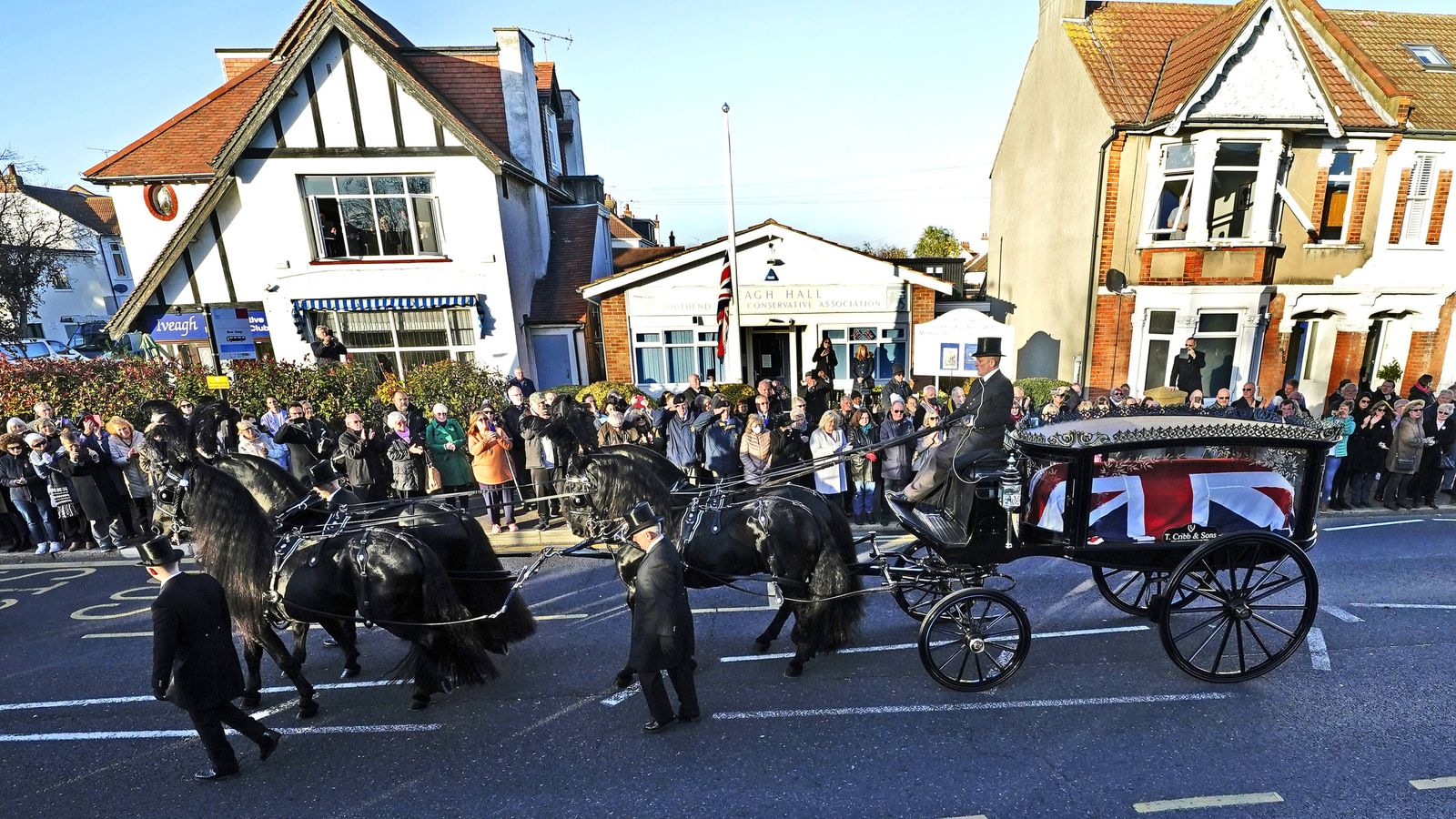 Sir David's body lay in the chapel at the Palace of Westminster overnight before his coffin was driven in a hearse and carried into Westminster Cathedral by pallbearers on Tuesday morning.

A private service was held in his constituency and home of Southend-on-Sea in Essex the day before, and a private burial is taking place after the Westminster service.