Note: this topic is subject to on-going research, which means conclusions and ideas change quickly based on new sources of information
See also Date of destruction of Pompeii and Herculaneum

Pompeii and Herculaneum are allegedly Roman era archeological sites in southern Italy. They are located near the Tyrrhenian coast, south of Naples. According to mainstream historiography, the towns were destroyed by the 79 AD large Plinian (the origin of the name) volcanic eruption of Mount Vesuvius, Europe's most active volcano.[W 1][W 2]

The sites were discovered "by accident" between 1709 (Herculaneum) and 1738, when two palaces were built which would later host the artifacts found at the sites. Following the War of the Spanish Succession between the Bourbon and Habsburg families, the Kingdom of Naples changed rule to the Habsburgs (1711-1735), after which king Charles III of Spain became the ruler of Naples. He together with his wife ordered the construction of various buildings around the time. The couple was involved in the construction of villas with sculptors, painters and other builders, and they were on site for decades.

Emmanuel Maurice bought property around 1709 after there were discovered some marbles and started excavating until he left for France in 1716. He is not supposed to have met Charles but it is mentioned that the couple had seen his Villa in 1738.

Convicts, slaves and children were used in the excavation of Herculaneum and Pompeii. 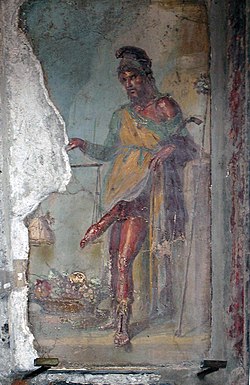 "During this time he studied the ancient ruins, which excited his interest in architecture and strongly influenced the form of the buildings that he designed

He distinguished himself as a writer while he was still a child at school, and by the age of twenty had written a play which was successfully passed off as a genuine piece of Classical literature.

In 1452, he completed De re aedificatoria,[W 4] a treatise on architecture, using as its basis the work of Vitruvius and influenced by [or influenced the faking of?] the archaeological remains of Rome. The work was not published until 1485.

De re aedificatoria remained the classic treatise on architecture from the 16th until the 18th century.[no ref given]"

Bombing in WWII (1943) and reconstruction

Sometime in the "re"construction of Pompeii, many murals explicitly depicting sexual acts were added. An account from 1819 speaks about the "appalling" images. If that testimony is credible, the murals must have been made before 1819, and probably after 1709, when the excavations "were halted for almost 20 years".